History of the IfM

Brief history overview of the Institute of Oceanography

The Institute of Oceanography (Institut für Meereskunde, IfM) was established in 1956 with Walter Hansen  being appointed as Professor and director of the institute. The research focus at the  time was on the development and improvement of physics-based ocean circulation models on regional and global scales. During the following decades, ocean and climate based research gained more importance within the Hamburg metropolitan area due to the establishment of the “Sonderforschungsbereich” (SFB-94, from 1970 to 1985) and the foundation of the Max-Planck Institute for Meteorology in 1982. This advancement within climate based research naturally fostered the development of the IfM. In 1982,  experimental oceanography was strengthened through the commissioning, utilisation and administration of the research vessel FS Valdivia and  the institution of the “Coordination center Meteor” (later German Research Fleet Coordination Centre) at the Institute simultaneously with the commissioning of the research vessel FS Meteor and later the research vessel FS Sonne. Throughout the 1980s the Institute established the following working groups: “Remote Sensing”, “Theoretical Oceanography”, “Experimental Oceanography”, “Regional Oceanography/Shelf sea oceanography” and “Ecosystem modelling” which were  accompanied by several new professorships.

In 2004 the IfM moved into the building at Bundesstraße 53 together with the Max-Planck Institute for Meteorology next to the Geomatikum after expanding and being placed in several locations within Harvestehude and Eimsbüttel - two quarters within the city of Hamburg.

In 2003 the Center for Marine and Atmospheric Sciences (Zentrum für Marine und Atmosphärische Wissenschaften, ZMAW) was founded, which was also affiliated with the DKRZ (Deutsches Klimarechenzentrum) and the GKSS research facility in Geesthacht (now hereon). In 2011, the ZMAW was transformed into the Centre for Earth System Research and Sustainability (CEN), which also conducts the management of the cluster of excellence CliSAP. During this time, two new professors and working groups, one with a climate modelling research focus  and another with a focus on sea ice started their work at the IfM. 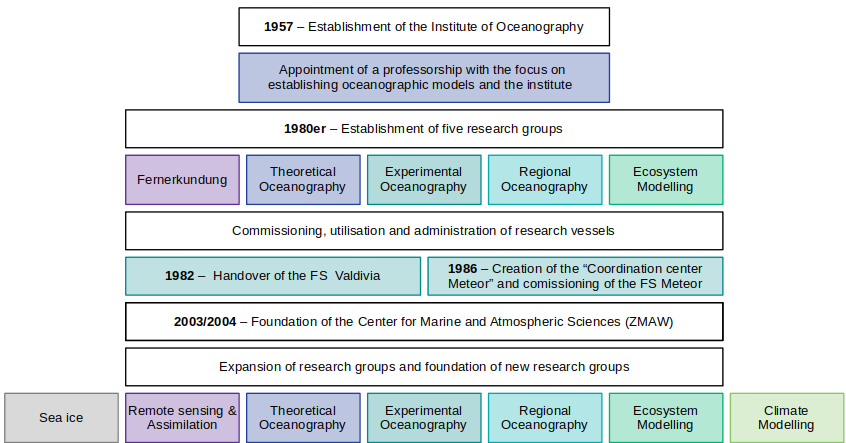 The teaching  of oceanography was part of the Universität Hamburg before the foundation of the IfM,  with the first lecture on “physical oceanography” (“Physische Meereskunde”)  taking place during the first semester of 1919. Oceanography was accredited as an examination subject ten years later. During the foundation of the IfM and the appointment of Walter Hansen as a professor and head of the institute the diploma course Oceanography (“Diplomstudiengang Ozeanographie”) was officially established.

Until the mid 1970s the IfM offered around 20 courses, which contained lectures carried out by both people affiliated with the IfM but also with other institutions in Hamburg and Kiel. The reform of the examination regulations of the diploma course in the early 1980s included more flexibility for students from the programs of Physics, Meteorology, Oceanography and Geophysics. It was possible to switch to Oceanography without any additional terms with an intermediate diploma in Physics, Meteorology or Geophysics. In 2006 the IfM and the Institute for Geophysics established the Bachelor program “Geophysics/Oceanography” during the Bologna process. The master “Physikalische Ozeanographie” (physical Oceanography), which was conducted by the IfM, was established in 2007 and replaced with a “Ocean and Climate Physics” Master Program, which was officially recognised as an English program at the start of the winter semester 2017/2018.