Theoretical Oceanography aims to describe the ocean dynamics and movements to improve the understanding of the ocean processes by using mathmatical and physical equations. These fundamental and complex equations are simplified and approximated to acquire solutions for certain problems. The solution is often found by using numerical models, which are used, developed and adjusted by our working group for the different scientific problems.

Important processes also happen on small scales and are the focus of theoretical Oceanographers. Meso- and small-scale variability has time and space scales much smaller than the basin-wide large-scale ocean circulation, but can act as a strong control on the ocean. 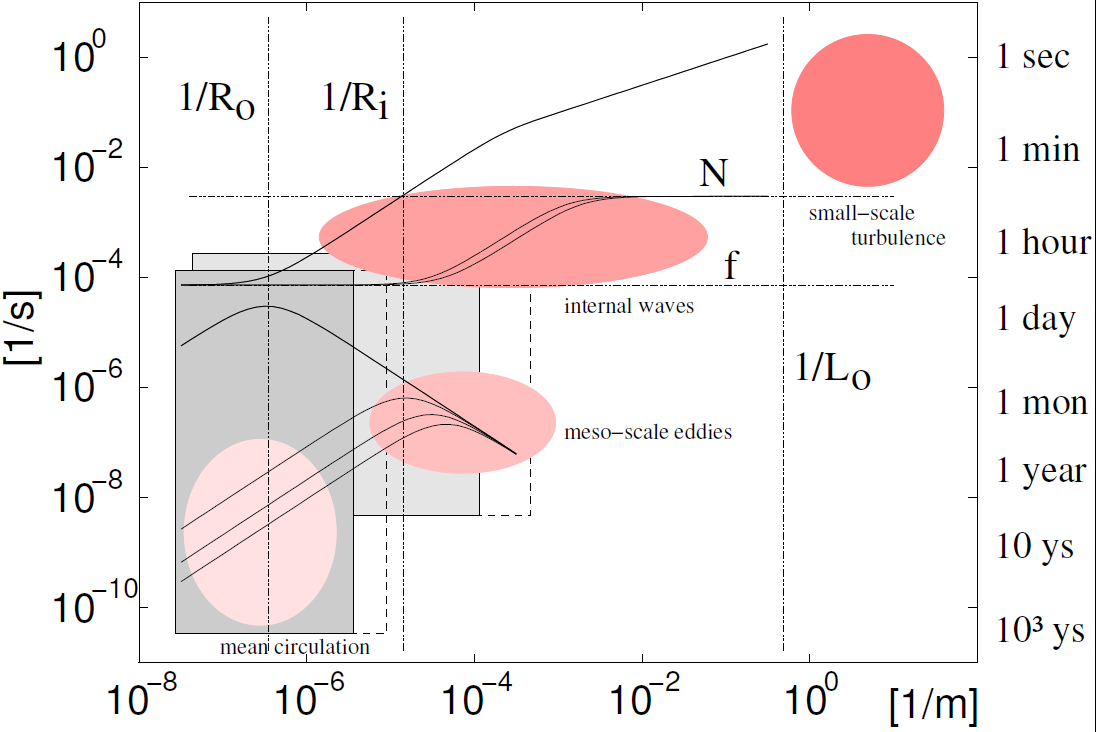 Figure: Space-time diagram showing the different dynamical regimes in the ocean as a function of the wave number and frequency. Grey boxes show the possible resolution of current ocean models. The dashed lines represent the increase of these boxes, i.e. increase in model resolution, with the expected gain of computer energy in the next 10 years (after Olbers et al., 2012).

Role of biogeochemical cycles in the ocean

Shelf seas in the climate system

Climate changes at the shelfs of the oceans are directly effecting society. The regionalization of the large-scale climate change scenarios as projected by ocean/atmosphere climate models in selected key areas the global shelf is therefore an important topic of physical oceanography. The effects of anthropogenic activities and climate changes in general are more pronounced in shelf seas than in the open ocean, hence one of our focus is ecosystem modelling.

Figure: a) Simulated deviations from monthly mean sea surface temperature in the North Sea (°C) from 1970 to 2006. We see a general warming trend, especially in the last decade and several short-term anomalies like the cold first half of 1996 and the hot second half of 2006. b) Annual mean air-flux of CO2. In the last decade the values are decreasing and very low uptake of atmospheric CO2 could be found in 1997 and 2006 (Lorkowski et al., 2012).